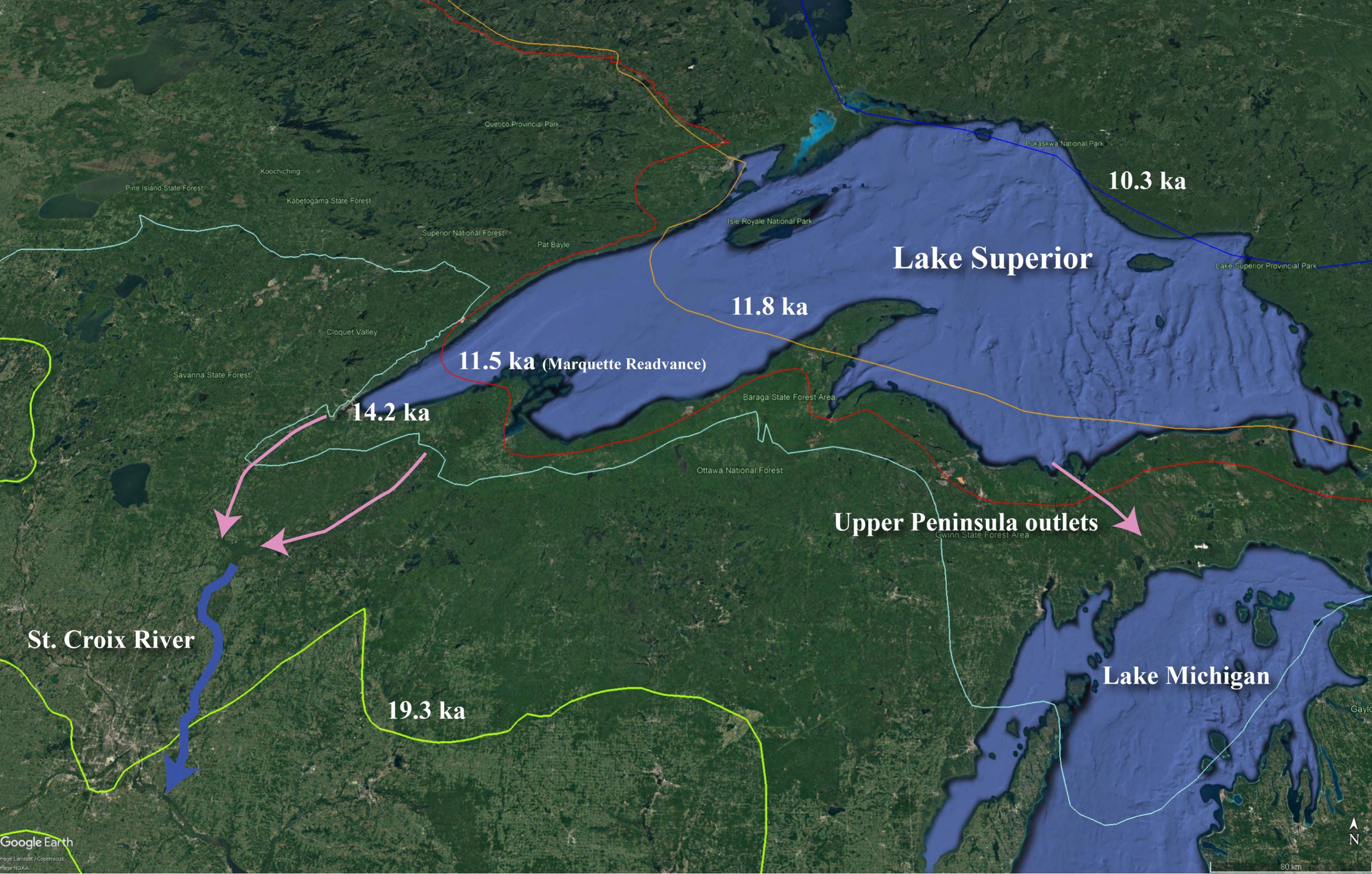 (Image Above: Lake Superior with outlets that will be studied (pink) and ice margins from last glacial maximum (green – 19.3 ka) through 10.3 ka.  Map was created by the EARTH Systems Laboratory with ice margins depicted here from Dalton et al., 2020 in Quaternary Science Reviews). 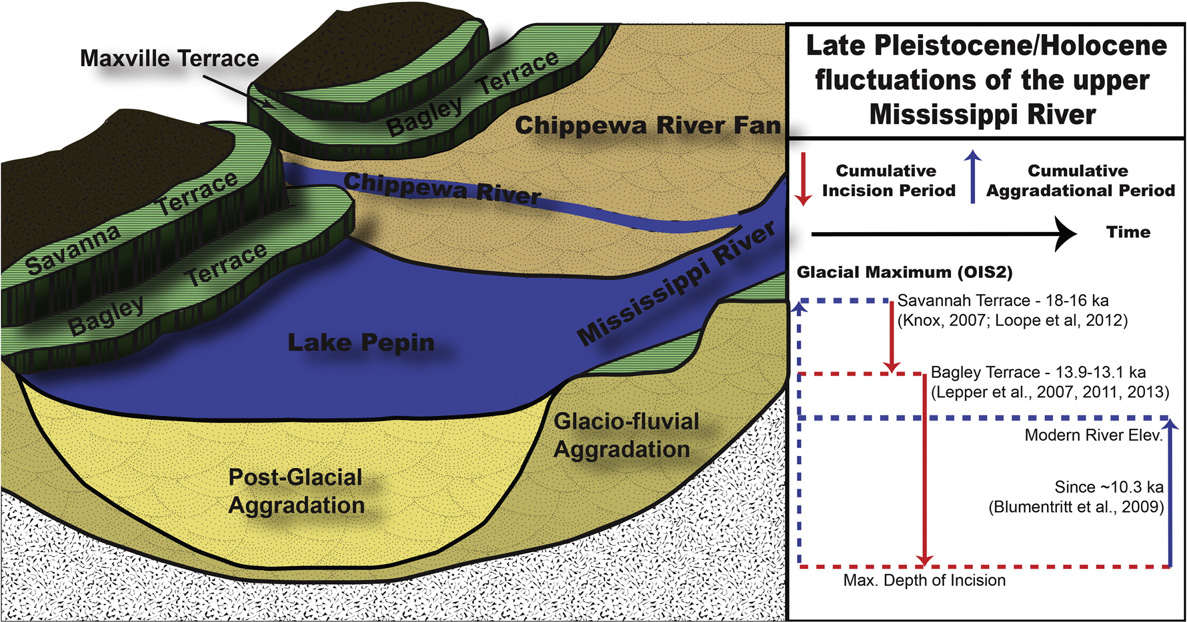 (Image Above: Simplified late Pleistocene/early Holocene history of base level fluctuations on the Mississippi River. Created for a publication by EARTH Systems Lab faculty and collaborators. Faulkner et al., 2016) 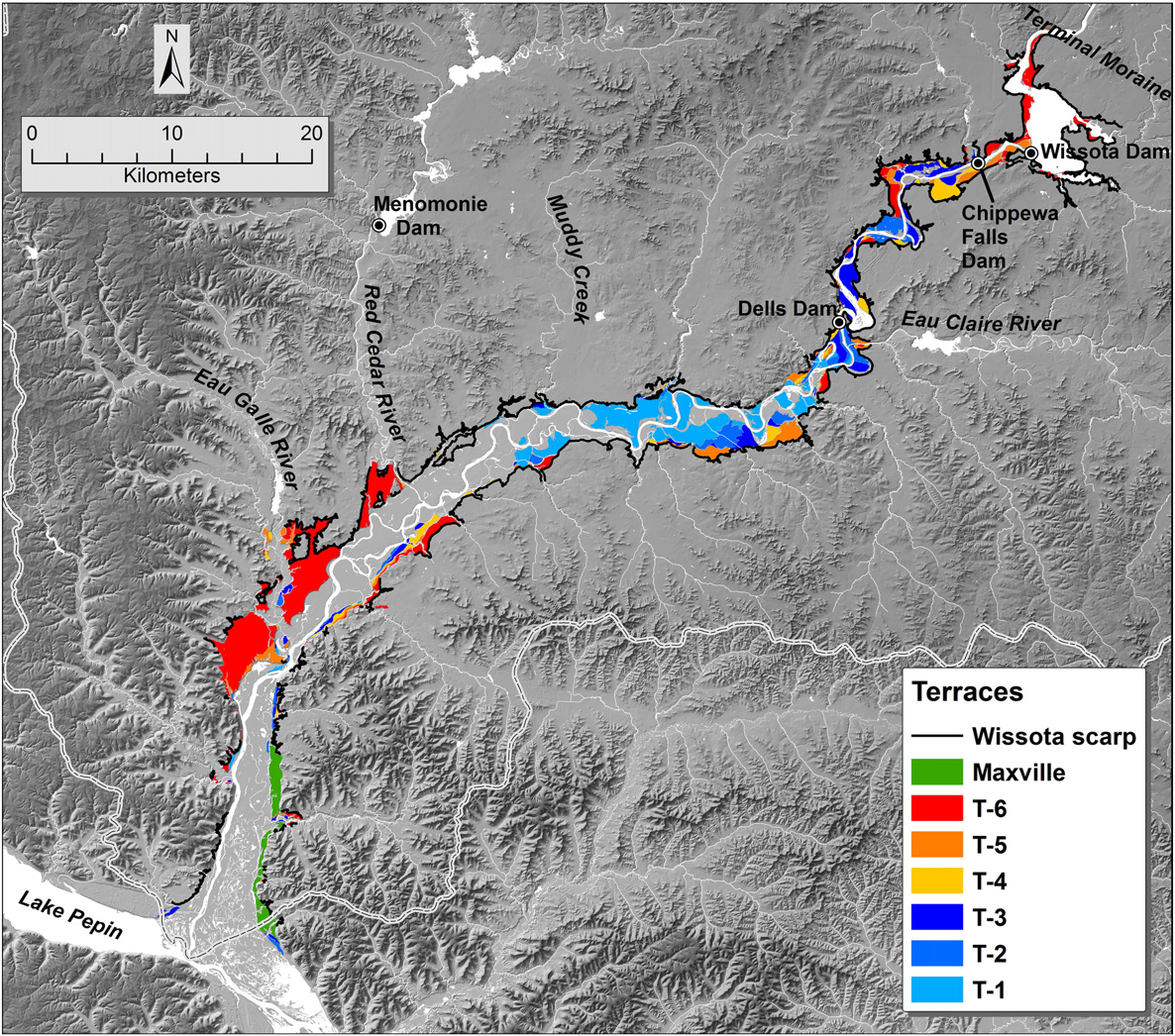 (Image Above: River terraces of the Chippewa River valley.  Abrupt base level lowering, caused by meltwater driven incision of the Mississippi, resulted in incision and complex response of the Chippewa River leaving behind a suite of terraces as evidence of ongoing landscape evolution since the late Pleistocene. Created for a publication by EARTH Systems Lab faculty and collaborators. Faulkner et al., 2016)

Paleoenvironmental change at and post last glacial maximum via investigation of periglacial and aeolian deposition and landforms. 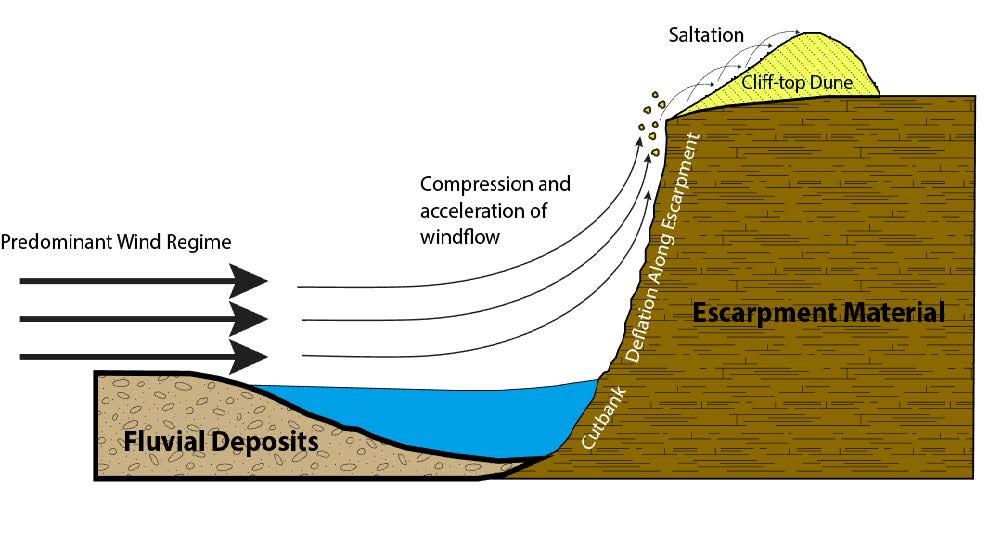 (Image Above: A cliff-top dune depositional model proposed to explain the origin of cliff-top dunes in actively incising fluvial systems.  Cliff-top deposition appears to be tied to both the river incising into its landscape and also correlates to potentially more arid periods of the Holocene.  Created for a publication by EARTH Systems Lab faculty and collaborators. Larson et al., 2008). 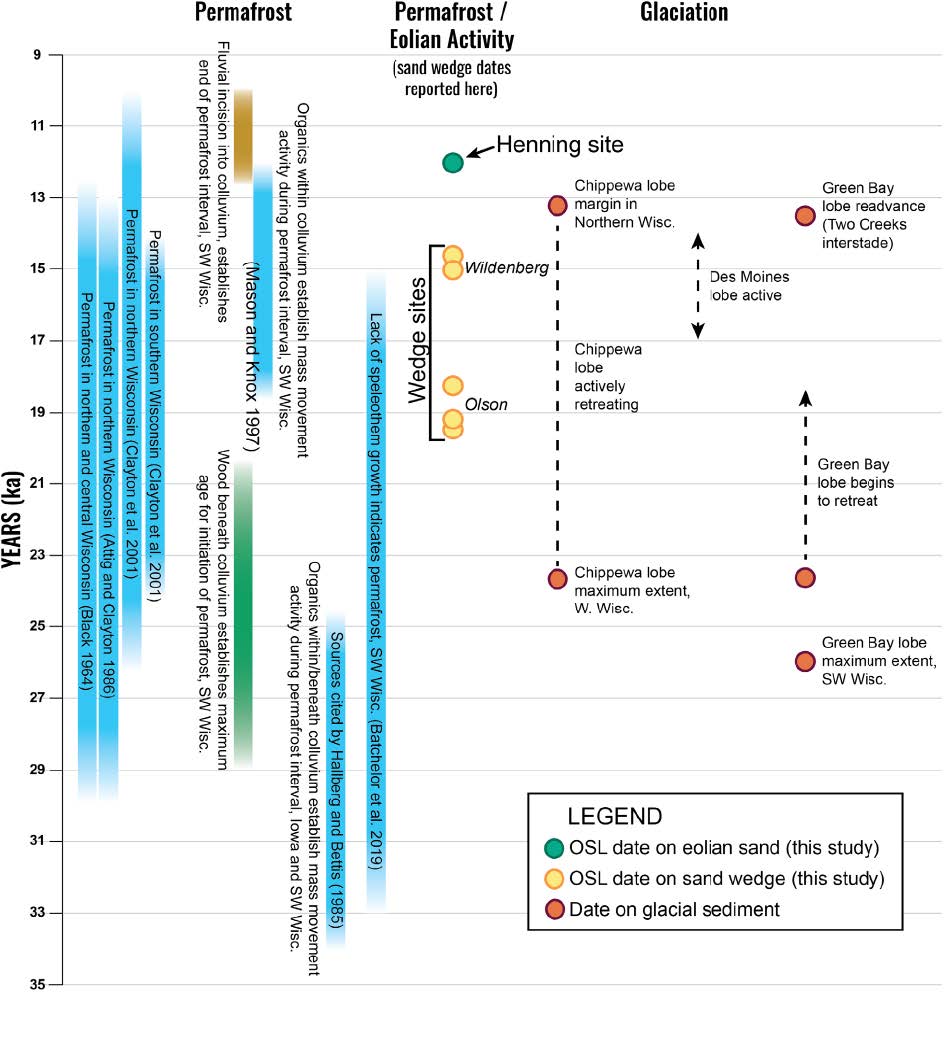 (Images Above:  Top left image is the Whitewater River drainage basin in southeastern Minnesota. Top right image is from 1940.  The man pictured is sitting on a bench of sediment that is pre-Euro American settlement.  All the sediment above him as aggraded since ~1880. Bottom left image is of the Ira Card farm on Hwy 75 just east of the town of Beaver – note the sediment aggradation burying the farm.  Bottom right image shows an example of Whitewater River change in the historic record.) 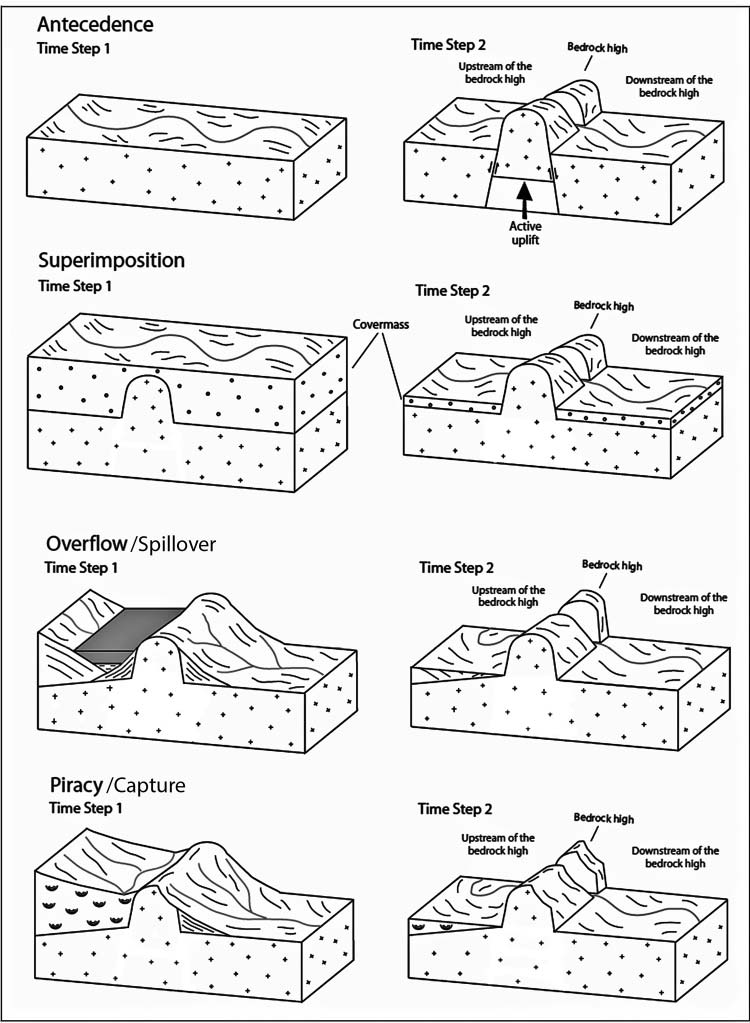 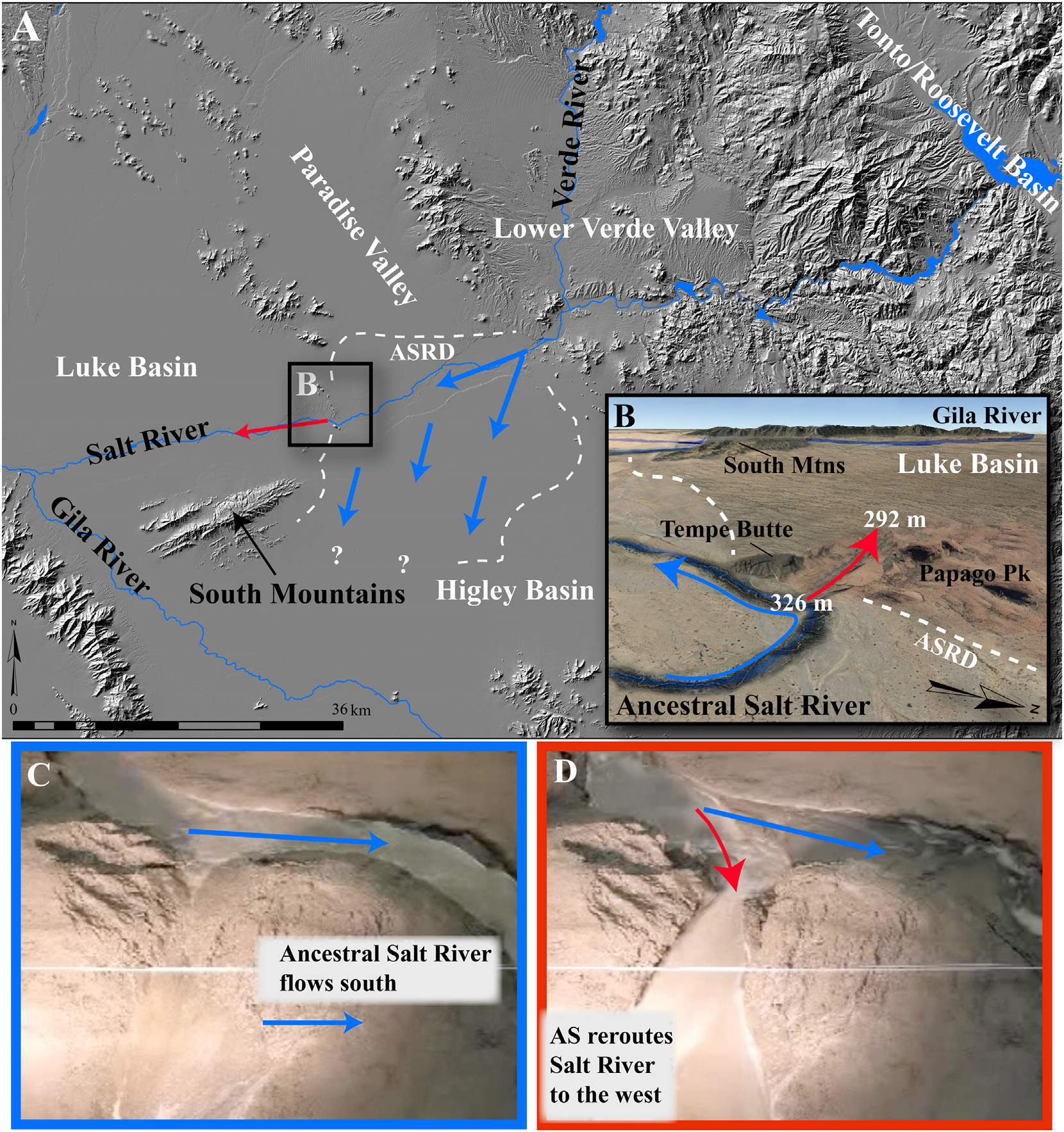 (Image Above: Aggradational Piracy or Aggradational Spillover event that resulted in the transverse drainage of the Salt River near Tempe, AZ, USA.  For ~2million years, the ancestral Salt River aggraded within the Higley Basin, after a transverse drainage was established upstream that integrated the lower Verde Valley basin and the Tonto/Roosevelt Basin via Lake Overflow. It is hypothesized that aggradation reached a sill in the Higley Basin and spilled over near Papago Park into the Luke Basin. This Aggradational Spillover event redirected the Salt River's position from flowing south to its present, more westerly course – through the heart of metropolitan Phoenix, AZ, USA.  Images C and D at the bottom show physical modeling experiments from Douglass and Schmeeckle (2007) demonstrating this exact process.  Created for a publication by EARTH Systems Lab faculty and collaborators. Larson et al., 2020)