Urban Management and Planning in the Real World

In February 2020, Urban and Regional Studies’ Dr. Miriam Porter traveled to Nepal to look at their post-Earthquake recovery through the lens of disaster management. Joining Dr. Porter in Nepal was Situ Chitrakar (’18), architect and urban planner, who served as co-researcher and translator. Working with international nongovernmental organizations (NGO) based in Nepal as well as local organizations, Porter and Chitraker mapped out what type of disaster was prevalent in different areas of Nepal and sought to identify best practices to address risk and mitigate disaster.

“Our goal was to explore the institutional level of disaster preparedness, management and recovery efforts after the 2015 earthquakes,” Porter said. “We were looking for specific areas of risk or areas of struggle.” Porter and Chitraker’s research identified seven areas of best practice: education, construction method creating awareness of the need for disaster preparation, streamlining response, preparation, accountability of governmental and non-governmental activities and the recognition that Nepalese culture includes service and generosity to others.

“We have done similar research in Ghana and chose Nepal to focus on because of the severity of the earthquake in 2015,” Porter said. “In addition, Nepal offers a variety of climates, cultural practices and population densities, making it ideal as a case study.”

Nepal is a nation of almost 30 million people living in a landlocked country between China and India. Covering an area of 147,181 square kilometers, Nepal has a diverse climate from the snow capped Himalayans, to valleys and green hills to flat plains. The hills and valleys have the largest concentration of people. In two earthquakes in 2015, almost 9,000 people were killed, 22,303 injured and 198 people are still missing. More than six hundred thousand households were fully damaged and around three hundred thousand were partially damaged. Millions of people were left homeless.

“We wanted to show that to identify and mitigate the effects of disaster, you must first understand thenature and impact of the disaster,” Porter said. “Successful urban planning for the next disaster rests on the foundation of that understanding.”

Read more about Porter and Chitrakar’s study entitled “International Perspective on Disasters; Post-Earthquake in Nepal,” which was published in the November issue of ICMA’s Public Management magazine. 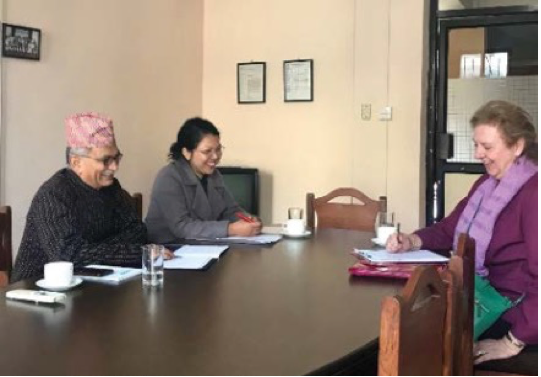