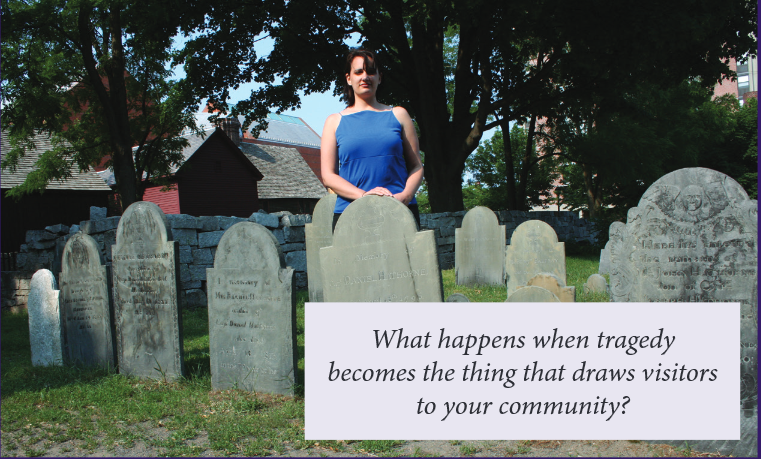 In 1692, twenty five citizens of Salem, Massachusetts were ex-ecuted based on ‘spectral evidence.’ In 1959, a small plane carrying Buddy Holly, J.P. “The Big Bopper” Richardson, and Ritchie Valens crashed into a field near Clear Lake, Iowa. In 1974, a family was killed by the eldest son. Months later, a couple moves in – and abruptly moves out, with wild tales of demons, bleeding walls, and supernatural abuse. All of these places have a connection – they draw visitors from far and wide. These places have become a magnet for American dark tourism, and have become so connected to the community where it happened, that the city’s name is synonymous with the tragic events. Salem. Clear Lake and the Surf Ballroom. And Amityville. The community is left with the status as a dark tourism community. URSI professor Beth Wielde Heidelberg’s research specialty focuses on how dark tourism impacts the communities and local governments that host them, and how local govern-ments of these communities cope with being know specif-ically for the tragic events that happened there. How they deal with the fact that their primary attraction, the thing that generates the most (and in some cases, the only) sub-stantial tourism is based on someone else’s grief. It’s not something these communities can use in their marketing or branding. And unlike large cities that have tragedy in their history, these communities may not have a wide array of tourism draw at the national or international level. The dark tourist point of interest is kind of it for them. Heidelberg has investigated how cities like Salem and Clear Lake have taken the tragedy and used it for education – in Salem, education about tolerance and diversity, and Clear Lake, about the musician’s musical legacy (Buddy Holly and the Crickets, after all, influenced the work of the Beatles, Bob Dylan, and other musical luminaries) and music history. Amityville’s lesson is still emerging, but it hasn’t embraced its role in popular culture, so it is difficult to say what lessons it will portray to the world, but Heidelberg’s work may help them move away from trying to run from their role in dark tourism, to taking control of the community narrative.